Brehme from the beginning up to now.

Since 1825 is the company Christian Brehme und Sohn established in Hildesheim, a city in the near of Hannover, Northern Germany. From 1825 til 2000 the owners have been tanners and letherware productioner.

has been the leading points, which let become the company as a well known supplier for the retail market in Germany and west european countries. 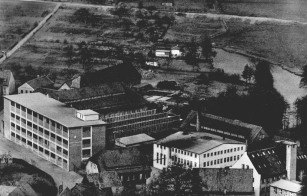 Franz Brehme Lederwarenfabriken, in the year 1963

After the second world war the production for leatherware items was in the focus of the company. The tannery produced only the lether, which was used for the production.

Beginning the 1970th years leather was replaced more and more from PVC, Nylon and Polyester. This makes tanners not really necessary for the future. The decision was to close the tannery and only to produce with synthetic material.

The last days of industrial production ends with entering the new millennium. Productioncosts could not figure the calculations with fare east productions. From now on we concentrate on trading our products made not in Germany.

Only a small handcraft collection made in our company is still in the line and become the last two years again a focus.